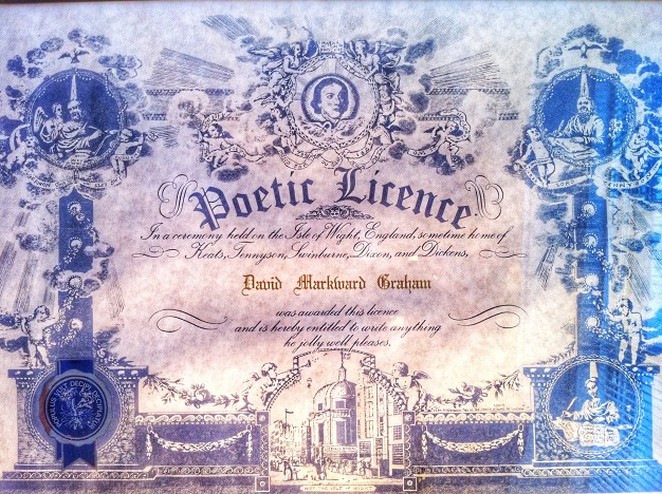 Some Thoughts About Writing

Editor's Note: Robert Wexelblatt, one of our Contributing Editors, has very graciously provided this month's Poetic License column while David Graham is recuperating from a stroke. If you check previous issues of Verse-Virtual (including the special October issue) you will see that Robert is worth listening to (or reading in this case.)

There is nothing so difficult as writing, at least from one point of view. Even when I yearn to do nothing more than to write, there is hardly anything I won’t do to avoid it, from swabbing down the bathroom to looking up the definition of enfilade. One reason I write is just that it is so hard for me to do.

From another point of view, writing is easy. Anybody can do it; in fact, almost everybody does. My one stint as judge of a national poetry contest persuaded me that far more people write the stuff than read it. The late Carlos Fuentes had something like the same idea. He once complained that Mexico suffered from having a million poets and scarcely a single critic. What I suppose I mean is that bad writing is easy and can be accomplished almost thoughtlessly, like sneezing. The words tear across the computer screen, encountering no resistance, appearing almost of their own accord, without mass, quite weightless.

I use a computer too, for everything except poems, essays, novels, and stories. These I have to begin with a large black fountain pen, my chief link to tradition. The Pelikan slows me down; to form a verse, a sentence, a paragraph is a physical undertaking. Each word has a weight that must be lifted then set down, indited, inscribed. Writing is like thirst and drinking: the pleasure is simultaneous with the pain.

Maybe it is true that anyone can write; but I imagine the true writer will agree with Thomas Mann. Asked to define a writer, Mann replied: “That’s simple. A writer is a person for whom writing is more difficult than it is for other people.” In the same way, dancing is more demanding for a dancer than for those of us who throw ourselves clumsily around the floor.

One of the surest tests of a true writer may be his or her capacity to endure Not Writing. It is no easy matter to stare at a page white as Moby Dick’s flank, to hold your pen over it—barely an inch over it, yet an infinite inch. Not Writing can make a writer desperate and superstitious. You begin to wonder how to propitiate the gods, what to do to waken the Muse. Would a blood sacrifice do the trick? A burnt offering? Should the proposition be made, would you sell your soul for a first sentence?

Writing may be the only sin that can be redeemed by being well committed. It takes some nerve to write, real chutzpah, and it can feel like a type of vanity. But the urge to write is not always impure or egoistic; there is also a mystery about it. Inspiration—having been breathed into—can justify it. When the writing is going exceptionally well and feels more like dictation than invention, this is because invention is proceeding beneath the level of consciousness. . . or, on a really good day, above it.

As an enterprise, writing is ambiguously private and public. For instance, to write a poem or a story is initially a solitary act, wholly interior. One writes first to satisfy or relieve oneself, or to do what the heroes who have consoled you in your solitude have done. The spectacularly well-adjusted and gregarious seldom take up writing seriously. And yet writing is also an undeniably social act. The 3700-year-old Akkadian letters unearthed at Zimri-Lin all begin “To my lord say. . .” From the first, then, writing has been a way of projecting a voice over space and time, obliterating both. Any writer could say with the reclusive Emily Dickinson, “This is my letter to the world.” Do I write for myself alone? Yes. Do I need a reader? Again, yes. Or, at least, probably.

Ex nihilo? Yes, a good deal of writing proceeds out of nothingness, not from knowing what to report but from an emptiness stirred up by the urge to write. In the beginning was the Word, but before the Logos, there was nothing. A character, a place, a fight, a scheme, a variety of weather, a philosopher thinking, the texture of silk, the meaning of a parable —I cannot know these things until I have imagined my way inside them. And yet it is also true that one writes in order to free oneself from what one has imagined. For a while the story or poem is the focus of everything; but when the tale or the sonnet is completed—and especially if it is published—you may feel liberated from it. Often, I can’t even remember what I’ve written, which can be embarrassing, but it is only because I have moved on.

How much do the opinions of others matter? It is always nice to receive a sympathetic and positive review, unpleasant to read the opposite, because the former encourages one to go on writing, while the latter does not. But do these judgments really count? Should one’s emotional chart move much either way? Here the old Socratic distinction between appearance and reality can be helpful: good reviews and bad ones are both appearances; either way there remain the same words you wrote and in the same order. For novelists there is the comfort of Randall Jarrell’s mordant definition of their genre: “. . . a novel is a prose narrative of some length that has something wrong with it. . . .”

I have published a novel called Zublinka Among Women and more stories than I care to count. The novel is long, the stories shorter and, no doubt, all have something wrong with them, but here size matters. In fiction, length determines form. In the short story plot tends to prevail over character (albeit not always), while in novels character dominates any particular action (again, not invariably). Henry James called what lay between the novel and the short story “the beautiful and blest novella.” Why beautiful and blest? I think it is because, ideally, the novella can achieve a precise balance between action and character. What prompted me to write down these thoughts was, in fact, writing a novella. I’m sure there is a good deal wrong with it but, thanks to its length, less than with a novel.

© 2022 Robert Wexelblatt
Editor's Note:  If you enjoyed this article please tell Robert.  His email address is wexelblatt@verizon.net. Letting authors know you like their work is the beginning of community at Verse-Virtual.